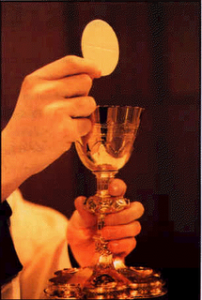 It is something that many Catholics hear often from others: “Mass is boring”. Their reasons for feeling this way are varied: the Homily, music, tradition, to the movements of the Mass themselves, bore them. If there is something we Catholics know how to argue about and disagree on it is the Mass. I have no desire to jump into the “Liturgy wars”. I have plenty of my own opinions that are my own and not universal and I am no fan of Marty Haugen or Dan Schutte music, but those fights accomplish little and continue to muddy the waters for those Catholics who really do not understand the Mass. In fact, I would argue that the number one problem for those Catholics who are bored at Mass is that they just don’t understand what exactly is going on during the Liturgy. In my mind, it is impossible to be bored at Mass if you truly grasp what is unfolding. So, I want to briefly explain the Mass from a theological understanding without getting too deep, so that I bore people who do not share my love of reading Church documents and the Summa.

When God created the Heaven’s and the earth, he made everything in a free act of love. This action, referred to in theological terms as exitus, is God sharing of Himself. In this sharing, God intended that His creatures would return to Him in love and worship through charity and faith. This is referred to as reditus. This essentially means that the created order is meant to return to God. Theological terms can be fun, right?! The first thing for us to keep in mind is that we were created to return to God in love and admiration. This is what we were made for. God wanted to share Himself with us and wants us to return to Him in that love. Pretty simple!

Now, how exactly does God want us to return to Him? Yes, there is a clear answer. He desires our worship through the only acceptable sacrifice, namely Christ’s Crucifixion and our obedience. On the night He was betrayed, Our Lord began a new Passover, so that His body (yes, His actual body) could be left with the Church that was to be founded by Him and led by Peter. Jesus was fulfilling His mission as High Priest in that He would become the new Paschal Lamb that had been sacrificed through the Levitical priesthood. He did this through the establishment of the Holy Eucharist and by His Paschal Mystery. He was the new sacrifice and he made a total act of obedience to the Father that we are to emulate. In fact, His sacrifice transcended the previous sacrifices of the Jews because Christ being both God and man he entered into the veil of the Holy of Holies. Meaning, he brought the sacrifice of Himself before the Father in Heaven for His people. Pretty amazing stuff! The Old Law had a prescribed liturgical form and sacrificial ritual that had been commanded by God, beginning with Abraham. Christ completed that ritual through His own Crucifixion and established the New Law, which is what most of us are familiar with in the Catholic Church.

How is this connected to the Mass? Well, the Mass as we know it today was formed over centuries of tradition. The Holy Eucharist has been celebrated from the very beginning of the Church, as is evidenced by the writings of the Early Church Fathers. The actual rites have undergone changes here and there, but the reality has been the same. The purpose of the Mass has always been the same. First, we are living what St. Thomas Aquinas called the virtue of religion. When we go to Mass we fulfill our purpose in life to give right worship to God. Remember how I explained reditus? The Mass is our return in love to the Most Holy Trinity. Second, we offer sacrifice. The Mass is often referred to as The Holy Sacrifice of the Mass and that is because Christ commanded that we offer sacrifice to the Father through the Holy Eucharist. Third, we are entering into communion with the actually body of Christ through our reception of the Holy Eucharist. Let’s look at each of these points individually.

First, by virtue of our Baptism and entry into the visible structure of the Church (membership in the Church) we are called to worship and glorify God. The largest action of charity we make in our lives is to attend Mass. It is there that we return to the Father in thanksgiving for all He has given us and seek reparation for our sins (we do this in the Sacrament of Penance too). This is also why the Mass is not about us. That’s right, the Mass is not about me or you. It is not a time for the choir to perform a concert, for me gain recognition for my working in the parish, or for the priest to dazzle an “audience”. The Mass is entirely about the Mystical Body gathering together to praise God, offer sacrifice, and move deeper into communion with Him. This is even more crucial in understanding when we realize who precisely is presiding over the Mass and who is present with us during the Liturgy.

Second, the Mass is the sacrifice offered by Christ on Calvary. No, we do not re-crucify Christ. Rather, we offer the glorified Body of Christ present in the Heavenly sanctuary, which is made present on our altars. The priest offers the sacrifice in the two forms of bread and wine. That is because in the Old Law, sacrifice was bloodless flesh separate from the blood. In a sacrificial understanding they must be separate. This does not mean only receiving the precious Body is invalid. The flesh contains the blood and Christ’s body, blood, soul, and divinity in its entirety. It just must be separate during the sacrificial portion of the Mass. Now there are differing schools of thought on my next point, but I am Thomistic in my school of Theology. Thomists would say that it is Christ Himself presiding over the Mass and offering sacrifice to God. That’s right, Jesus Christ Himself offers our Mass. He offers Himself to the Father along with the Mystical Body of Christ, through the visible ordained priest. Mass isn’t so boring anymore, is it?! Not only that, by virtue of the reality of Heaven reaching our altars, the Church Triumphant, the souls and angels in Heaven are also present. There is an invisible company of witnesses present at every single Mass. It’s incredible!

Third, Christ left His body, under the guise of bread so that we may reach out and touch His body that was broken for us. We enter into an intimate union with Christ that unites us body and soul to Him every single time we receive Holy Communion. He is physically with us for the 15 minutes or so it takes for our body to digest the consecrated host. Christ loves us so much that He wants nothing more than to be united with every aspect of what makes us human. So when someone asks you if you have a personal relationship with Christ you can reply that you have the most intimate relationship with Him by virtue of the Holy Eucharist. This is one of the key issues that separates us from our Protestant brethren. Our churches house the body, blood, soul, and divinity of Jesus Christ. The King of the Universe dwells in our Tabernacles and waits for each one of us. That is how He always wanted it to be and that is why He left us His body in the Holy Eucharist.

This, in a very short blog post, is what we participate in when we go to Mass. The Mass is not where we are entertained. The Mass is where we enter into the presence of Jesus Christ. It is where we offer our love and devotion to the God who made us and died for us. It is where Christ reaches down and physically touches us in our brokenness. It is where we can unite our own sufferings to His. The Mass is quite literally the most important thing that we do in our lives. The next time you are at Mass meditate on what is actually going on. Approach the Holy Eucharist as if you were bowing down before the King of Kings, because that is precisely what you are doing. It is quite impossible to be bored at Mass when you know what is taking place.

For further reading on this topic, I recommend Scott Hahn’s The Lamb’s Supper and Edward Sri’s A Biblical Walk Through the Mass.

← Miscarriage and the Sorrowful Mysteries of the Rosary
Abandon Ideology for the Good News: The Test is Coming →